If creativity and imaginative power are encouraged, the wealth of ideas grows and flexible thinking is trained. Effort and perseverance in producing an image convey competence. The moment a piece of art is completed, pride and self-confidence arise.

Therefore: Art and creativity are important for children! This is why Banque Raiffeisen has been organizing on the traditional Molconcours for the past 49 years as part of the international youth competition "jugend creativ".

The international youth competition "jugend creativ" symbolizes this idea: A community action that promotes children across national borders to deal with the important issues of our time in a creative way. The competition was invented 51 years ago, in 1968, on the occasion of the 150th birthday of Friedrich Wilhelm Raiffeisen. A group of co-operative bankers developed a plan to create a creative competition for children across national borders. Two years later, the time had come: Inspired by the moon landing of Apollo 11, the Volksbanks and Raiffeisenbanks called for the 1st International Youth Competition under the motto "up in space".

…has proved its worth! The competition is celebrating its 50th anniversary next year. This is how long "jugend creativ" has been supporting the creativity of young art talents.

… is huge! Each year, around 700,000 children and adolescents participate in the competition organized by the Volksbanks and Raiffeisenbanks. This makes "jugend creativ" one of the biggest youth competitions in the world!

... is international! The competition connects creative people beyond the borders of the country. Children and adolescents from Germany, Finland, France, Luxembourg, Italy / South Tyrol, Austria and Switzerland show what inspires them.

... is groundbreaking! In the 49th round of the international art competition, the theme "Inspired by music" encourages children to let their creativity run wild. Every year, the participants artistically deal with another socially relevant topic.

The Molconcours - a tradition of Banque Raiffeisen

Under the patronage of the Minister of Education Claude Meisch, the "Molconcours" will once again be held this year as part of the international competition "jugend creativ". Focusing on tradition of the painting competition, Banque Raiffeisen underlines its commitment to building strong and lasting relationships with all customers, especially children and adolescents.

The 49th Molconcours will take place from January 21st to March 29th 2019. This year, the artists of the cycles 1, 2, 3 and 4 can let their creativity run wild around the topic of "inspired by music". Music connects us with people, with memories and with places. Through music, we experience moments very different and often much more intense. Whether it’s on the radio, at a concert, in films or in a traditional way while playing an instrument - joy, Grief, love, excitement - all of these emotions can be expressed very well with music.

Students, who take part in the traditional painting competition "Molconcours", organized by the Banque Raiffeisen every year, will once again be rewarded with great prizes:

All national winners of cycles 2, 3 and 4 automatically participate in the international competition. In addition, an audience prize will be raffled on the Banque Raiffeisen Facebook page.

From the 21st of January to the 29th of March, each teacher will be able to register for the class award and, with some luck, win Grosbusch Kids tickets to explore the world of fruit and vegetables with his students. Among all classes, 50 classes will be determined by the drawing of lots. 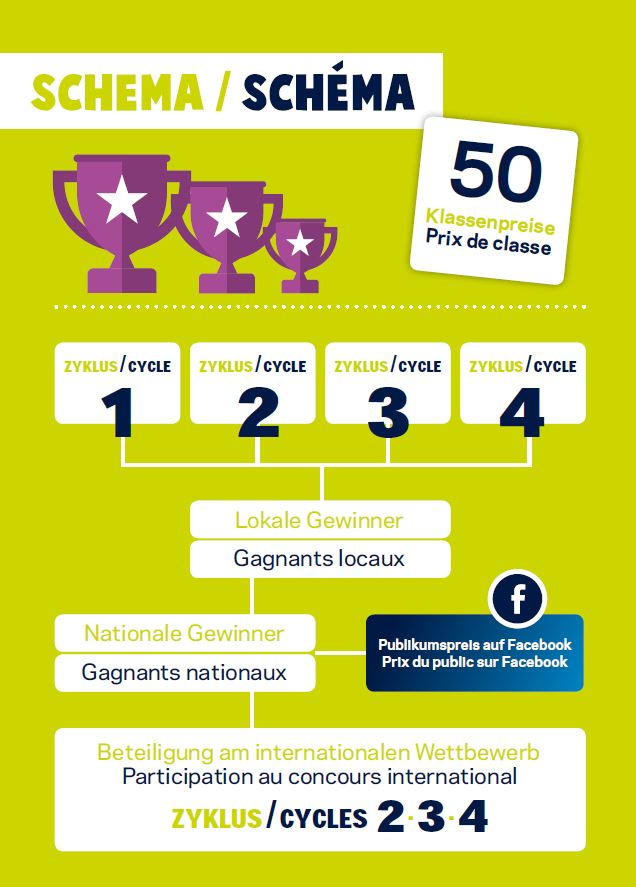 More information on the Molconcours